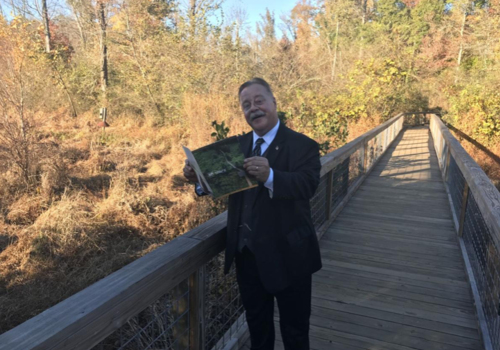 SPARTANBURG — Teddy Roosevelt impersonator Joe Wiegand will connect with the Spartanburg Community through history and lessons on conservation as part of a series of events on Nov. 11-13 hosted by The Spartanburg Area Conservancy.

“Theodore Roosevelt is not only an inspirational character where you can really get down into the weeds of public policy and the great debates of his age, which sound an awful lot like the great debates of our age, but he is also somebody with such an overwhelming personality and abilities of a storyteller,” Wiegand said.

Throughout his acting career, he has toured all 50 states and seen the forests, reserves and parks that Roosevelt established or tried to preserve during his presidency. Through his character, Wiegand hopes he can convey the message that conservation means the wise use and utilization of resources in a manner that leaves natural resources in better condition for future generations.

“He’s an amazing character to bring to life,” he said. “His daughter Alice said that father wants to be the bride at every wedding, the corpse at every funeral and the baby at every christening.”

On Nov. 11 from 6-8 p.m., audiences can spend an evening with Wiegand as Roosevelt at Spartanburg Community College Downtown Campus’s Evans Theater.

The conservancy will celebrate its fifth Annual Shucking Good Time with Chef William Cribb and Cordovas on Nov. 12 from 6-10 p.m. at Glendale Shoals Preserve. The event will feature cocktails, local beer, wine and live music from Nashville-based touring band Cordovas.

A family day at Glendale Shoals is Nov. 13 from 10 a.m. until 2 p.m., during which Wiegand will again appear as Roosevelt. The event will feature performances and activities from the Spartanburg Art Museum and the Spartanburg Library’s Bookmobile.

Glendale Shoals Preserve consists of 13 acres and is located at the old Glendale Mill on Lawson’s Fork Creek. The land was donated to Spartanburg Area Conservancy in 1993.

Kathryn Harvey, principal and founder of Neue South Collective, said the conservancy is “continuing a balance because it’s just as important to have green space in the development of an area as it is the actual development.”

Harvey’s team worked with the conservancy to bring Wiegand to Spartanburg so the community can better understand how their contributions help maintain areas like Glendale Shoals.

Proceeds from the events go to the conservancy. Tickets and information can be found at spartanburgconservation.org/event.