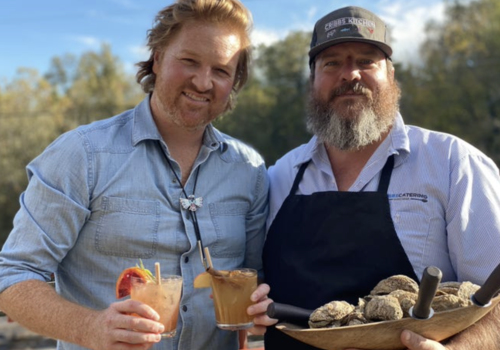 A Shucking Good Time returns this year as part of a three-day fundraising initiative for  SPACE (Spartanburg Area Conservancy), A Weekend with live music from Cordovas.

"The party is on the bridge this year and that's kind of exciting to make that change back. We haven't had this size event on the bridge in several years," said conservation director Clay McDonough.

► This year's event will feature a special form of entertainment — actor and historian Joe Wiegand, who will be reprising Teddy Roosevelt, the conservationist president. Teddy will be at the adults-only, A Shucking Good Time, and at two family events, An Evening with Teddy Roosevelt at the downtown Spartanburg Community College campus from 6-8 p.m. on Nov. 11 and at Family Day at Glendale Shoals from 10 a.m.-2 p.m. on Nov. 13.

► Chef William Cribb will be preparing a Low Country Boil and cooking oysters over an open fire for the crowd. Wade's will be providing banana pudding for dessert. And there will be more than enough to go around, Cribb assured.

► The bar will feature several specialty cocktails, beer from RJ Rockers and wine from Keg and Cellar.

"I'm doing a drink called the Texas Time Change, which is a blood orange margarita, and we're doing something called the Offseason Turkey Hunt, which is a bourbon honey crisp cider smash," McDonough said.

► The event is also zero waste. The event will be using Atlas Organics to compost the shucked oyster shells and all dinnerware and serving vessels will be either reusable or compostable.

"We've gotten pretty good regional response with the band being bigger than we've ever had. We're on WNCW advertising and we're getting interest from all over the Carolinas, so we should be able to educate some new people about not just conservation, but Spartanburg area conservation specifically," McDonough said.

► This is the fifth annual A Shucking Good Time. SPACE was unable to hold the event last year due to COVID-19.

"Nonprofits like us, we're able to operate because of fundraisers like this in large part, so to be completely honest, it's a relief to be back out having these events. But also, it's exciting because it's an opportunity for us to interact with 300, 400 of our supporters," McDonough said.

► Tickets are $125 and include unlimited food and drinks. Tickets will be available on SPACE's website, spartanburgconservation.org, for those age 21 or older through Friday morning or until sold out.